I never bought a riftS as I have a narrow IPD which it doesn’t cater for. I’m familiar with the Oculus tool suite from when I had a CV1 and the earlier dev kits. My primary headset now is the Valve Index.

I received a Quest this Christmas and after purchasing a 3rd party cable I decided to give Oculus Link a try in X-Plane. The results are less than stellar. Even when I maintain the native refresh rate and run at a steady 72fps I have terrible latency in headtracking.

The oculus overlay (available with tray tool, debug tool and OVR plugin) can display the headtracking latency. I’m hoping some riftS users could run the overlay with x-plane and share their Latency numbers. Preferably, to take ASW out of the equation, I’d like these numbers when running at full 80fps on riftS. Many users should be able to achieve this if you load up a rural airstrip and clear weather.

I’m anxious to get some real numbers for comparison to establish if it’s my cable, the compositor or some other issue. For comparison vr only games don’t exhibit the same latency I get in x-plane. If any Quest users want to share their numbers that would be interesting as well.

Thanks in advance for any help.

I’m still trying to wrap my head around what hes talking about, I’ve never once looked at latency numbers or thought about what they mean. are you talking about the difference between when you move your head and then the image in your headset begins to move?

Yes that’s exactly what I’m talking about. I’ve now connected the quest wirelessly with virtual desktop and steamVR to rule out the cable as the issue. The R22 in Aerofly FS2 works perfectly but again x-plane has issues. Even at 72fps. I could fly a fixed wing easily enough but for helicopters the head tracking latency is just too high.

It was fun flying around with touch controllers from my living room armchair, streaming from the pc at the other end of the house. I’m happy that I’ve narrowed it down to an x-plane issue. I’m just looking for the latency numbers with x-plane from a riftS user to compare them.

That’s a good enough excuse to give AC3D a rest, I’ll see what i can do before work.

seems like i’m at a bit of a loss on how to actually get the numbers you’re looking for. I set up OVR tool for what i think should present me with what you want, but the Debug tool HUD (not shown on the screen shot for some reason) shows the latency test feature is disabled. 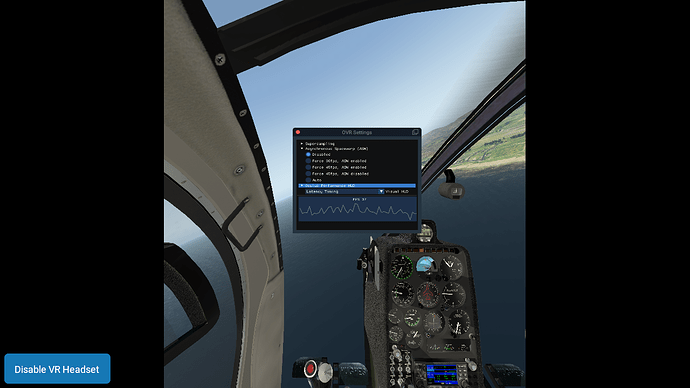 Thanks for taking a look. It sounds like you did everything correctly. Maybe that latency feature is only available for Oculus link and the Quest.