New here, what to buy

Hi every body,
i’d like to introduce myself and asking you guys some questions.
I am a real italian helicopter pilot, and i am gonna be more than happy helping anybody out if they need to. In the meanwhile i please need your help. I want to create a sim home, and i have a nice budget. What do i have to buy and to install? So far i have a powerful pc, shitty thrustmaster controls and MFS 2020. Onestly the h135 on microsoft it’s not what i expected, i am looking for a real fliying experienxce in terms of aerodynimcs. I dont really care about landscapes or sunsets, i wanna have some real time flying. Any suggestions it’s gonna be helpful, about controls software vr etc. Thanks guys

I’m in helicopter (sim) flying for a while now, beeing a PPL-pilot in real world besides working as an aviation psychologist. I had hoped MSFS2020 would deliver helicopters right from the start, which is why I have been in the first beta 18 months ago - now they cleared up to bring helicopters in after they get the physics right and the current H135 is just some workaround, produced by the community.

I really like the way the UH1D, the Gazelle and the MI-8 work in DCS.
DCS itself is for free, coming up with the new version 2.7 pretty soon, you have to buy the helicopter moduls but if you wait for sale days you get get them for very decent prices.

The H135 of Aerofly FS2 is as well a nice model, behaving close to what I expect from a helicopter and the sim is available for a not to big amount of money.

The big deal for me was VR as I think it absolutely is essential to have 3dimensional spatical perception operating a helicopter close to the ground. As you mention a powerful pc you should have sth. like a RTX2080 or even RTX2080Ti in your rig which is pretty good enough for the mentioned sims, helicopter flying and VR. At the moment I would recommend a HP Reverb G2 which was a juge step from my Oculus Rift.

Last thing that I really LOVE is the Pro Flight Trainer Puma, available directly from the producers or from retailers. 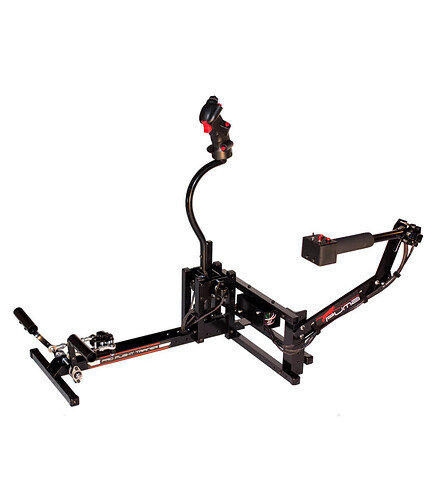 I am emphasizing this by mentioning again that I really love the combination of VR, FT Puma and helicopter flying …

If you are willing to burn more money I am sure there will be lots of people helping you out but for decent money I’d say the devices mentioned above will be good.

Lots of good informations, thanks for helping. I ve already tried dcs with the gazzelle, the aerodynamics works much better than MSFS, but dcs wasn t able to read the thrustmaster 16K pedals. What would be the difference between oculus quest and the g2?

The owner of Pro Flight Trainer is also a real helicopter Pilot.

Ask about his Virvutal Blade Setup. It is a s real you can get and the most realistic helicopter flight simulator. in your home or office.

With the Virtual Blade he can also have it setup with motion.

If you want even further realism check out the Sim Shaker JETPAD from Andre’s Sop.
andre@andres.shop 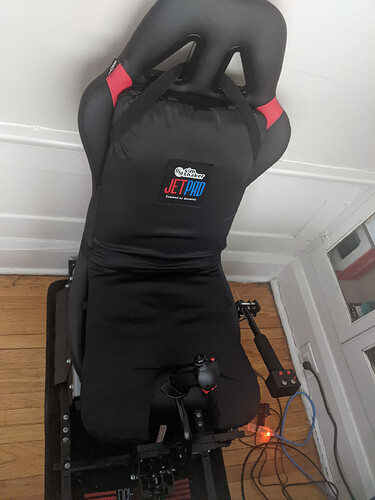 The vibrators reacted with precision to the load posed on the helicopter. I have two of them.
One for my helciopter setup as seen in photo and one for fixed wing aircraft.

Oh … and … btw … DCS just started a community sale where they say "Enjoy up to -50% discount on most of our products. "

Thanks again, it looks like these puma controls are some serious stuff. Which simulator do you use (X-plane dcs prepar3d)?

Zuingo, My post has an error. SORRY ABOUT THAT.

I have the Pro Flight Trainer.

The Virtual Blade helicopter simulator made by a real helicopter pilot is for Komodo Simulations in the U.K.

The virtual blade can also have motion.

Stay with Microsoft Flight Simulator 2020, This is the best advice I can give you.

Microsoft Simulator 2020 is working its way to having helicopters added to its MSFS 2020.

One group has taken the lead with regards to helicopters without Microsoft’s Help with amazing results are absolutely incredible.

I gave them $100.00 USD for COFFEE.
I definitely encourage others to buy them a COFFEE.

Like you, I was a bit naïve about the fidelity of helos in P3D.I have since found that all turbine helos in P3D are totally faked with data and not real flight models, or engine models. Because of that I have had to write my own engine support software just to get engine RPM, mast RPM, torque values and such to reasonably approximate the real world. I am also completely building all displays for the helo since I wanted a glass cockpit (not G1000) I am using the Nemeth Design AS-332 as the base add-on in P3D v4 (not v5 because it doesn’t run well in v5). Would be glad to help you out with your project. My sim ins a full scale SH-2H Seasprite with functional dual controls and a complete avionics and weapons system.

for a good flightcontrol-set you can also get an “apache-v2” set - made in italy, which is very solid, and customizable.

F.E. I switched the collective to the right side for testing: 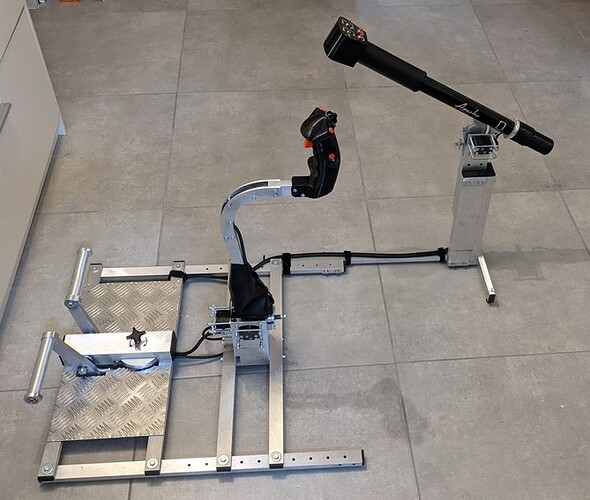 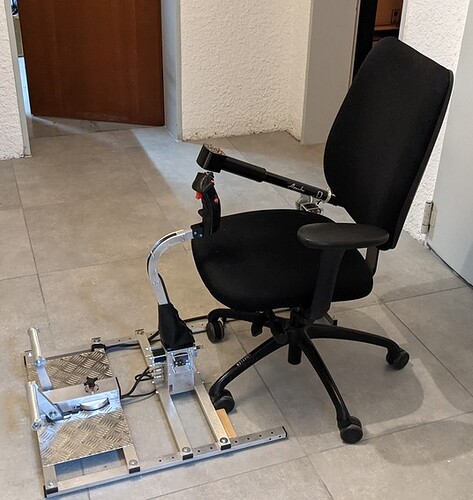 And I agree to the fact, that the best experience in flying helicopters in a sim, has to be with VR.
I use a HP Reverb G2 and X-Plane (most time with the free Rotorsim EC135).
But you need a good and modern GPU (I only have a GTX 1070 because I could not get a RTX3080 until now … THIS UGLY MARKET

I would suggest a set of pedals, a fold out chair, and a set of VR goggles with hand controls. Throw that together with XPLANE11 and you have yourself as real an environment as you can hope. Hope this helps.