My personal take on the H135

So after some prevarification, I thought “What the heck, it’s freeware. Just try it!”

I was not disappointed!

Despite the fact that flying a helicopter can be likened to sitting on a beach ball while balancing a plate with a marble in it on your head which you have to keep there purely by moving your hands and feet, the guys at HPG have managed to produce a remarkably workable flight model. Getting an even half way decent helicopter feel in a home PC simulation isn’t easy - a helicopter really needs that “seat of the pants” feel, without which you can’t get a true feel for the aircraft.

Many small movements are needed to stay ahead of controlling the beast and if you make too big a movement you are almost certainly going to bend something. Just like the real thing it takes practice to hover (say) over the centre spot of a football pitch (real football!) instead of sliding back and forth between the goals or twisting around like a dog chasing its tail. That’s why it can be a lot more difficult in a flightsim “game” than in real life. It took me a good couple of dozen hours as a technician on “you have” flights in real world helicopters. In the end, it was the likes of Gazelle and Lynx which became my favourites to fly. Intelligent power management systems take a lot of work out of flying helis.

Considering my limited experience and flying skills, especially never having even been anywhere near an EC135, I was able to “get in”, start the engines and go flying without the need to read the instructions. Is that a testament to Airbus for intuitive design? Perhaps, but HPG did a great job of that too. That’s right, I am not a pilot although I do have a couple or three hundred “you have” hours flying Sioux, Scout, Gazelle and Lynx on maintenance and test flights.

That easy start up and intuitiveness is one thing HPG have managed to get right rather well. Congratulations HPG!

Now, with around 15 hours flying the model, I can say that this offering - especially as it is still freeware - this is one excellent addon for msfs.

Well, yes. Quite a few actually, although none too serious. So here, in no particular order:

But all in all - this has become my favourite helicopter addon in all the flight simulations I have used.

And for the painters: 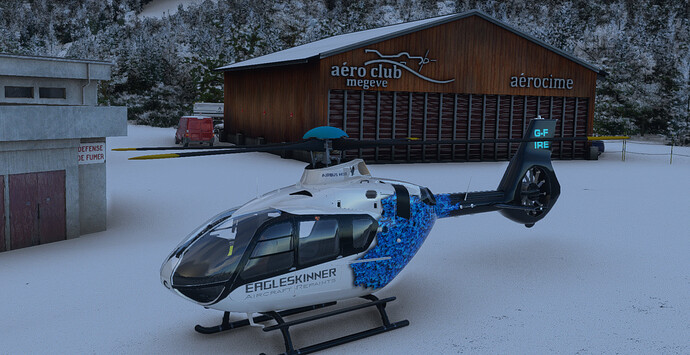 Keep in mind that the systems in this model are not replicating Airbus’. Although the 135 is not a hard helicopter to startup, this is not a faithful recreation of the avionics and systems (not yet, at least).

For what the project is, I agree: it’s a great addition to the sim. I have been trying the updates but I don’t use it myself, though. It feels too weird for me.

It’s a heck of a good job from the team and the evolution has been fantastic. I love seeing these projects rise from within the community.

I agree. Imagine getting the “Helionix” system.

The Hype folks have done a brilliant job so far - with the tools available. we did have a simple 6 axis motion simulator for the army Lynx which was great for the “butt feel”. I did get a few "flights in that too.

It’s a tad too easy to get the HPG H135 overspeeding. and outside of it’s envelope, but that only makes the learning curve steeper. Getting this one hovering is an achievement, but you can, so that is a good plus point. I have managed reasonable sideways and rearwards flight as well, and landing the cab on one of those many helipads around SWS’ Okavango scenery is well doable, although they have made the ground contact area “tight” to say the least. I still fall off the edges a few times.

Now if HPG managed to get the 3D model smoothed off and the panel edges mapped better I would rate this payware quality just for the model alone.

Things like rotor tip stalling, vortexes, ground cushion, animated searchlight, swashplate motion, flattened grass FX and high OGE hover etc. do need Asobo’s work still - and that is still a year away. The main thing is that HPG have shown Asobo what can be done by skilled enthusiasts.

I find hovering it is harder because the flight model doesn’t simulate an actualy physical object that well so it’s not acting as you expected (and that’s a huge reason why I don’t like it).

The Bell 47, for example, is harder to hover precisely because of the opposite. It has inertia but at least you are expecting the behavior and, over time, you learn how to intuitively correct it. A lot of the stuff in the 135 felt off to me and I didn’t want to start getting used to it, learning any bad habits. I am afraid a lot of folks will learn those bad habits and when helicopters with better flight models come out, they will say they are “broken”.