By then I've published this article about the Hype Performance Group’s H135 Helicopter Project for Microsoft Flight Simulator.

This is a companion discussion topic for the original entry at https://www.helisimmer.com/articles/airbus-h135-helicopter-project-microsoft-flight-simulator-month-later/
Bellah1z March 31, 2021, 6:25am #2

This is a great introduction to heli flight, its not perfect but its fun and is a helicopter and very flyable and every release they surprise me with how much it improves. It’s also freeware so you just can’t go wrong!

Actually they just released .83 and now the cockpit is alive heaps more functionilty and you can now do a basic auto rotation turbine style and the flare seems quite realistic.

Every 5 or 6 days we are getting upgrades and unlike the MSFS updates it works better every time!

Sad to say but I have all but abandoned P3D now as I think this helicopter is really getting to the level of P3d helis now but with the advantage of the MSFS world.

I still use X Plane but I really notice the lack of world to look at!

I really thought this could not happen according to Asobo but its happened and again it makes me wonder what the boffins at Asobo have been doing, which I think is nothing but talk about how hard it is to do rotary wings though I did notice in the last SDK it had an option for a bell turbine … one line code in 3 years , good grief

Asobo is working on other stuff and they seem to be particularly busy with getting things ready for the XBox launch.

They also need to fix everything that’s wrong with the flight dynamics so they can build the helicopter FDE on top of it without compromising future work. It needs to be as good as a generic FDE can be. It’s not just about making 1 specific helicopter but to give developers a tool for them to make any helicopter they want. And that includes single and multi-rotor (tandem and coaxial) helicopters.

Not only that, they don’t just want to “add helicopters”. They want to add all heliports and helipads (“all” being relative as I’m sure they will miss some) and they want to make that an automated process instead of having to add them manually.

They also want to add, at least, some missions to helicopters, which means they will have to develop other mission dynamics such as, for example (and I am just guessing here), hoisting, long line ops, etc.

When you take a step back and realize that all that needs to be done (and, again, they are not doing it for a single helicopter) it is quite the feat. Especially when you have software dependencies on other modules.

Also, it’s quite easy for a small team to get away with a bad free addon and get praise from the community. People are going nuts over the amazing job the H135 is. Microsoft and Asobo can’t afford to do that. Can you imagine what would happen if Microsoft released something like the H135 was when it came out and say: here is your helicopter?

Version 0.84 is out , its improving and its fun, not perfect but very grateful to Hype Group for leting us land in some skyscrapers and difficult locations arround the world.
Also thanks to this Sergio site, a reference for the helisim , i allways come here to see if any helinews are out!. 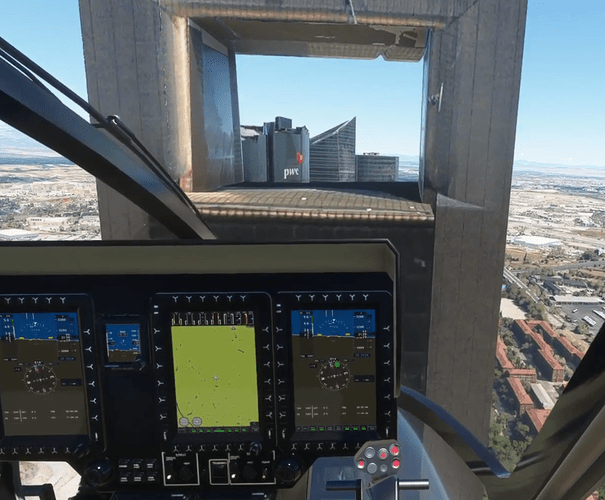 Hi jappyflies, this is really fantastic.
Can someone please help to configure my PUMA Pro helicopter flight simulator with this AIRBUS H135 Helicopter simulator in Microsoft Flight Simulator 2020 so I too can have some fun with it!!!

Many Thanks in advance.

We know that in some point in time MSFS2020 may release a helicopter model of its own. One of these days… Currently, fans of MSFS2020 can download and fly the H135 to satisfy that helicopter itch. There is only one problem. If you do not have this mod installed into your sim, and you encounter another player flying this mod on his sim, you will see the other player doing all the great things that helicopters can do. But the other players aircraft will not look like a helicopter. The other players will look like a General Aviation airplane doing things like hovering, landing on a pad, flying backwards or side slipping. kind of kills the immersion of the sim, right?

What would it take to get some traction on this?

Hi Gpruitt54, in order to get some traction on this would be for every helicopter simmer around the world to donate $100 dollars to Microsoft because as a Multi of Billions of dollars company they did not have enough money therefor could not have hired programmers to have helicopters available in the new MSFS 2020.

Plus MSFS is now generation a few Billion of dollars in merchandising and it is still not enough money for them to hire programmers to have helicopters available in MSFS 2020.

I am in Contempt with Microsoft and I am being Sarcastic!!!

OF COURCE THEY HAVE BILLIONS OF DOLLARS, THEY SIMPLY LEFT THE HELICOPTER COMMUNITY STRANDED, OUTCASTS!!! WORHTLESS!!!

When Microsoft announced the rollout of MSFS2020 and completely left helicopters out of its stable of aircraft, I felt the same way you did, and I still feel left out in the cold, and stranded. Funny, Microsoft left me feeling this way once before, when they dropped Flight Sim X. At that time, It was at that time when I dropped them as well and went to X-Plane and DCS.

BTY, I posted a similar request on the Asobo forum and was responded to with an interesting level of snarkiness. That should tell me all I need to know about their intentions as it relates to helicopters and the community.

They do have the programmers. But they also need to build the software the right way.

There’s a lot that influences the helicopter flight dynamics that needs to be fixed AND they have to port the sim to XBox to gain more traction and get more revenue to justify future developments.

Microsoft is a billion dollar company but they are not a simming company. Their focus is not MSFS and never will. MSFS is just one product that can be axed if it doesn’t perform well so every step needs to be planned and executed properly so they can keep moving.

People use that billion dollar argument far too often and that is not fair for the MSFS team at all. They are not the ones holding the money.